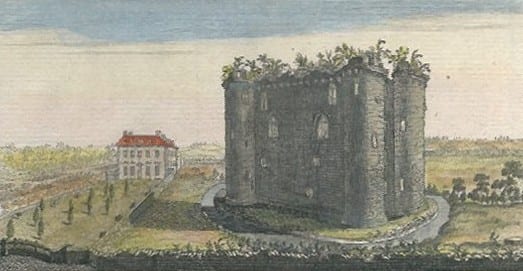 Nunney Castle
Owned by the Praters 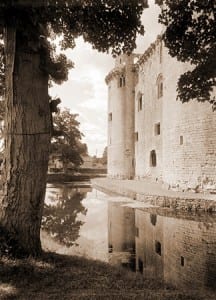 It is located (ST 737457)
The type was quadrangular, A tall and compact castle.
In 1373 Built by Sir John de la Mere.
It was destroyed in 1645 by Oliver Cromwell.
When Sir John de la Mere, a Knight, became tenant-chief of the royal property in Nunney and obtained a license to erect a fortification at Nunney from King Edward III, a church had already been erected in the best position, so de la Mere chose a low-lying site on which to build the castle, which was very small.
de la mere had served in the French wars and had become rather enamored of the French chateau style and paid more attention to this than the construction of a fortification.
While the aslar masonry walls were beautiful, in no way could they withstand even the mild cannon attacks of the Edwardian period. And the loops or what is the window slots were suitable only for bows or crossbows. The castle had no outer buildings protecting it and the water from the moat came up directing to the edge of the castle, ala the style of Bodiam Castle in Sussex. Access to all was by a large newel stair in the NW corner of the castle which connected to a wooden rampart walkway surrounding it all, and the castle had no portcullis (grating across the entrance) that could be lowered in case of attack.
The only time the defenses of the castle were ever tested was during the War with Cromwell in 1645 and when the Parliamentarians placed their cannon on the high ground overlooking the castle, they were able to breach its north wall almost instantly and the defenders of the castle were defeated within two days.
In 1910, the north wall of the remains of the castle collapsed and fell into the moat. This debris has since been clean out and the shell of Nunney Castle stands in remembrance. Its magnificent presence remains in the center of the manorial village of Nunney, Somerset, England.
Ownership of Nunney Castle:
De La Mere – Family and heirs
Paulet – Family and heirs
George Prater purchased it from John Prather Estate
Richard Prater inherated Nunney Castle from his father George Prater in June of 1564 and lived in Nunney Castle until his death in 1580.
Anthony Prater was trustee of the Estate from 1580 to 1586 (6 years) when his brother Richard died
When Richard’s son George became of age in 1586 Nunney Castle was passed to him.
Richard Prater heirs lived there until 1645 when Col. Richard Prater lost the castle to Fairfax, the commander of Cornwells forces in the battle that took place at Nunney. It was never lived in again.