The Titanic: Ship of Dreams 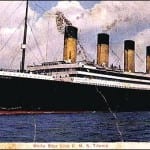 On April 10,1912,the R.M.S. Titanic set sail from Southampton, England on her maiden voyage to New York.

She was the world’s largest and most luxurious ship ever built at that time.

Although Titanic had been warned about icebergs several times that evening by other ships nearby, she was travelling at top speed when one grazed her side.

Two hours and forty minutes later, the Titanic plunged to the bottom of the sea taking more than 1,500 people with her. Only 705 passengers were saved.

The world was stunned when she learned of the fate of the unsinkable Titanic. It carried some of the richer, most powerful industrialists of her day.

In addition to the wealthy and middle class passengers, she carried poor immigrants from Europe, and the Middle East seeking economic and social freedom in the New World.