Believe it or not: The Titanic Never Sank

Many years ago there was a conspiracy theory that the Titanic never really sank and that it was the sister ship the Olympic.  It was said to be an insurance scam of Titanic proportions.   The Olympic was launched about a year before the Titanic and seemed to be cursed from the start. 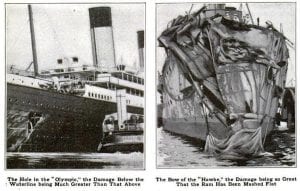 In 1911 it was involved in two very serious collisions.  The first was on September 20th 1911 when the R.M.S. Olympic collided with the British Cruise H.M.S. Hawke of the Isle of Wight.  Captain Edward Smith was the captain of the ship at that time.   On a small side note there were two crew members that not only survived the collision with the H.M.S. Hawke but also the Titanic sinking and the 1916 Britannic sinking.   The two crew members were stewardess Violet Jessop and stoker Arthur John Priest.   The second was in February of 1912 when the R.M.S. Olympic lost a propeller blade on its eastbound voyage from New York.  Both times when the R.M.S. Olympic was damaged parts were taken from the R.M.S. Titanic’s resources.  So like I said it was said to be an insurance scam as the damage to the R.M.S. Olympic was possibly more serious than admitted by the Harland and Wolff shipyards in Belfast.  It was said the damage was virtually a write-off and repairs would be ruinously expensive.  Millions of pounds is a major concern and potential financial disaster for an already troubled White Star Line. 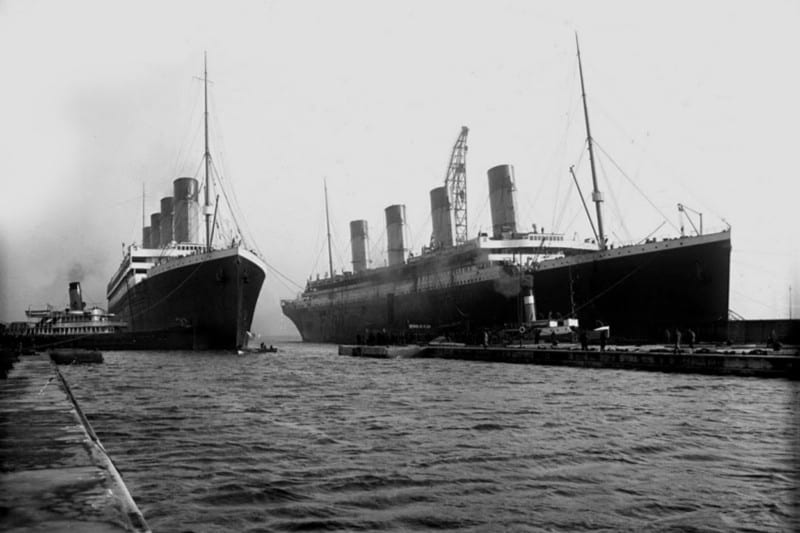 While the R.M.S. Olympic was moored side by side in dry dock, were the nameplates and plaques swapped? The two ships were essentially identical except for a few minor differences.  Here is a photo that shows partly what some have been claiming as the “Big Swap”

The evidence they reported was the Olympic had 16 and the Titanic had 14.   The lettering of the name under the portholes was shown in the picture.  Windows spacing was reported as another.  Were these aesthetic changes to the Titanic?  If it was for aesthetic why was the more evenly spaced windows on the Titanic changed to somewhat unevenly spaced? 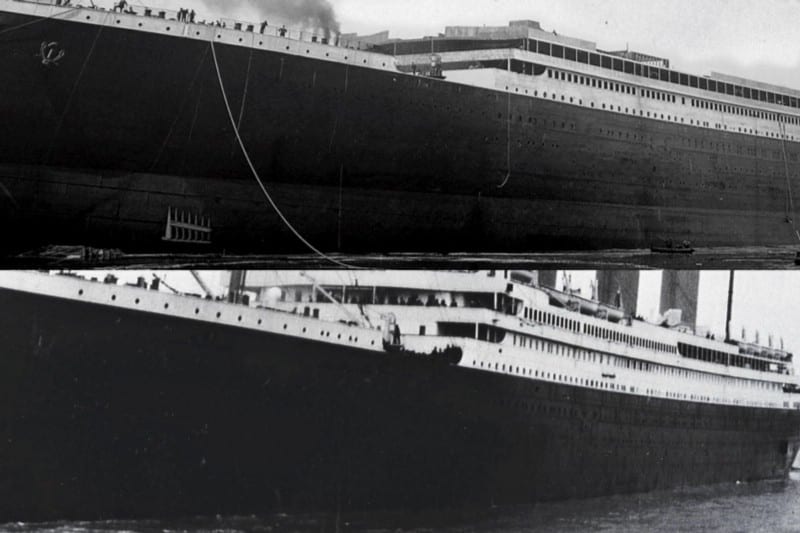 And what of all the rumors and last minute cancellations?  Many men refused to work on the R.M.S. Titanic as any price even though there was a nationwide coal strike.  Many say that the rumors among the workers that the ships had been swapped as part of an insurance scam had frighten men off from wanting to work on the ship.  The rumors even included that the Titanic was to be sunk.  It was also said that the rumors might have spread outside the shipyard and that was part of the reason at Titanic’s launch is was only half full when it left Southampton.  Not to forget about the cancellations, many of the rich and prestigious people were booked on the R.M.S. Titanic canceled at the last minute.  People like JP Morgan, the famous  international financier who owned the White Star’s parent company and Industrialist Henry Clay Frick and his wife, banker Horace J. Harding as well as billionaire George Washington Vanderbilt.

It was also said that the SS Californian, which was owned by JP Morgan sailed out during the time of the Titanic’s disaster carrying no passengers, even though it was a large passenger ship, and its only cargo was 3000 woollen blankets and jumpers.  It behaved somewhat oddly around the time of the Titanic’s voyageas it steamed into the middle of the Atlantic, stopped and waited.  A survivor of the Titanic sinking, Edith Russell, was adamant that Titanic officers assured her the Californian was on its way.  So was it serious navigation errors lead to the Californian stopping 12 mile away in the wrong area?

Even though there are arguments by many as to why this did not and could not have happened, I leave it up to you to believe it or not.